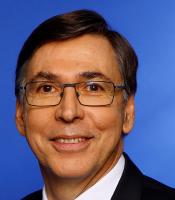 Denis Beau has been Deputy Governor of the Banque de France since 1 August 2017. He has also been appointed by the Governor to represent him as Chairman of the Autorité de contrôle prudential et de résolution (French Prudential Supervision and Resolution Authority – ACPR). He is a member of the college of the Autorité des marchés financiers (French Financial Markets Authority – AMF) and of the Supervisory Board for the European Central Bank’s Single Supervisory Mechanism.

Denis Beau has also been appointed Chair of the Committee on Controlling (COMCO) of the ECB since 9 January 2018 and Chair of the Analytical Group on Vulnerabilities (AGV) of the Financial Stability Board (FSB) since March 2019.

Born in 1962, he joined Banque de France in 1986 after graduating from l’Institut d’Etudes Politiques de Paris. He subsequently received a Master degree in Business Administration from INSEAD. His career path at the Banque de France led him to hold management positions in the Financial Markets, Payments and Market Infrastructures and Economics and International Relations departments. He was seconded to the New York Fed (1997-1998) and served at the Bank for International Settlements as secretary of the G10 Committee on Payment and Settlement Systems (2007-2008). He was then appointed Director General of Financial Stability and Operations and a member of the Executive Committee of Banque de France. In this capacity he was a member of European and international committees dealing with monetary policy and financial stability issues and prudential regulation of banks (Euro Retail Payments Board, Committee on the Global Financial System, Basel Committee on Banking Supervision – co-chair of the Macroprudential Supervision Committee).