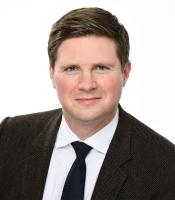 Obtained Abitur (higher-education entrance qualification) at Goldberg grammar school in Sindelfingen in 1999. Studied law in Regensburg, Cambridge and Heidelberg from 2000 to 2005; passed first and second state examinations in law in 2005 and 2007 respectively; obtained doctorate at the University of Tübingen in 2012.

Has been a lawyer specializing in banking and financial supervision since 2009 and worked for an international law firm until October 2017.