Former Prime Minister, Honorary Member of the European Parliament, Chairman of the Foundation Prospective and Innovation 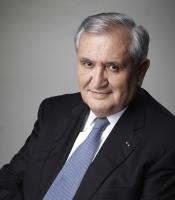 Born in 1948 in Poitiers, Mr. Jean-Pierre Raffarin is graduated from l’École Supérieure de Commerce de Paris (ESCP). He was senior lecturer at the Institut d’Études politiques of Paris and he occupies this position at ESCP Europe since 2007.

Political career at the national level

From 1988 to 2002, he was President of the Regional Council of Poitou-Charentes and presided over the Association of French Regions. Meanwhile, he was also a member and questor of the European Parliament.

From 1995 to 1997, he was appointed Minister of Small and Medium Enterprises, Commerce and Craft. Appointed by Jacques Chirac, he was the French Prime Minister from May 2002 to May 2005.

Elected Senator of Vienne from 1995 to 2017, he also occupied the position of Vice-President of the Senate from March 2011 to September 2014. Moreover, from October 2014 to July 2017, he was President of the Foreign Affairs, Defense and Armed Forces Committee of the Senate.
Since the beginning of his political involvement, he is a member of governing bodies of Center-Right political family.

- Advisor to BOAO Forum (Asia);
- Chairman of the Foundation Prospective and Innovation;
- Chairman of France—China Committee Annual Forum;
- Chairman of the Foundation Leaders for Peace
- Board member of the China Europe International Business School (CEIBS) in Shanghai;
- Board member of the “Praemium Imperial” – Tokyo;
- President of the French Republic’s personal representative for Francophony from 2009 to 2012;
- Several presidential missions, including the one related to economic relations with Algeria.
- French Special Representative for China (since January 2018).